Always willing to expand the knowledge and experience of the Fight Team, Fightworx entered a team to the 2017 British Sambo Championships. Gary (one of our BJJ coaches) has a background in Sambo, having previously competed himself in a number of Sambo competitions, including the British Championships.

“SAMBO” – A Russian Martial Art developed in the 1920s, originally for the Soviet Army to improve their hand to hand skills, is now growing in popularity thanks to success in MMA by Sambo trained fighters such as Khabib Nurmagomedov and Fedor Emelianenko.

The Sport version of Sambo allows all varieties of throws and takedowns, and also allows fighters to continue fighting and looking for domination or submission on the ground: All in all, a great rule set between the groundwork of BJJ, the stand-up of Judo and the all-round nature of MMA.

The Fightworx Team did themselves and the gym proud, especially considering that this is the highest level of competition available in the UK, with competitors from all over the UK, Europe, and from Russia, Ghana and USA

Stuart Kingston won Gold in the Masters Division <90kg beating 2 previous British Champions on his way to the podium
Milan Tomes took Silver in the Mens <82kg category
Billy Wilsher won Silver in the Mens <74kg division, losing only to a Russian fighter from the famous Sambo70 club in Moscow

Another excellent achievement is that, other than the finals, none of them had a single point scored against them in the elimination rounds. 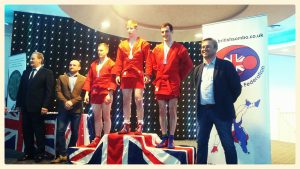 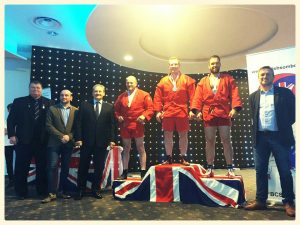